Available for deployment on-premises or on the cloud, DBHawk is an all-around database management, analytics, and governance solution for a broad range of SQL and NoSQL databases, including AWS Athena, Amazon Redshift, Cassandra, Greenplum, MongoDB, MySQL, Oracle, Microsoft SQL Server, SAP HANA, and Teradata. It also integrates with identity and access management (IAM) technologies and platforms such as SAML, LDAP, SSO, Okta, and Google Identity Services.

With built-in Object Access control to limit access to authorized users only, DBHawk logs all types of activities performed across your databases, including user authentication and SQL actions. Thus, it is ideal for use in organizations that are subject to data protection regulations such as GDPR, HIPAA, Sarbanes-Oxley (SOX), FISMA, FERPA, and PCI.

This case study showcases the use of DBHawk in a roofing contractor company with operations across the US and Canada.

Headquartered in Pittsburgh, Pennsylvania, Centimark (https://www.centimark.com) is acknowledged as North America’s leading commercial roofing contractor. Centimark has over 95 offices throughout the United States, Canada and Mexico.

In recent years, Centimark started shifting more of its operations to the cloud, particularly Amazon Web Services (AWS) platforms such as Redshift, Aurora, self-managed MySQL on Amazon EC2, and DynamoDB. It also started migrating its cloud-based SAP systems to SAP HANA, as it sought to leverage the transactional and analytical processing capabilities of the latter in further improving its operations.

As Centimark transitioned to the cloud, the company’s internal teams found that both Toad and Oracle SQL Developer cannot easily access its databases on AWS. This same limitation was observed in SAP Business Application Studio. Centimark users also bemoan that Toad often gets corrupted every few months.

To resolve the limitations in its current crop of database management tools, the Centimark operations team in charge of the company’s Oracle and SAP systems decided to look for an alternative tool that could support both its Oracle databases and SAP systems.

Centimark’s database team tried out several tools that it hoped would allow users to connect to production databases efficiently, and without adversely affecting the performance of its production, development, and QA databases.

From among these tools, the Centimark team shortlisted DBHawk, as it saw that it can connect to both Oracle, SAP, and its myriad databases on the cloud without any issues and at a more affordable cost. The team reached out to Datasparc, the company behind DBHawk, for assistance in further evaluating the tool for its needs.

Early on, Centimark decided to evaluate the DBHawk Software-as-a-Service (SaaS) solution since it would mean not having to install anything on their infrastructure. Instead, Datasparc will host the software and manage it for them. DBHawk also supports hybrid access for databases located on premises or in the cloud.

The Centimark and Datasparc teams worked closely together to ensure that Centimark could use DBHawk with its databases using Google Identity Services. Centimark’s teams found the process of using DBHawk to connect to its various databases straightforward.

With DBHawk, Centimark’s internal teams found a single tool for accessing their various Oracle databases, and their SAP-based systems. At the same time, DBHawk was used to connect to Centimark’s various cloud-based databases. Without compromising database integrity, the transition to the cloud has been smoother and faster as a result.

Centimark also found DBHawk to be the ideal tool for accessing Redshift, which has not been possible with its old tools, and even with AWS tools.

When Centimark encountered an issue, the Datasparc team stood ready to help. A requirement to connect to external databases from within Centimark’s internal network was resolved using a virtual private network (VPN) tunneling feature built into DBHawk.

DBHawk also allowed centralized user access management with Google Identity Services. From the DBHawk Dashboard, administrators immediately know which team members are working on specific instances and queries. They are also assured that only authorized users can connect to their production databases. Moreover, users cannot see any data unless they have been specifically given access to that data.

As Andrew Blatt, who led the Centimark team in charge of the evaluation team, said

" I definitely recommend DBHawk SaaS solution to those looking for a capable hybrid tool that can manage and work with Oracle, Redshift, SAP HANA and other databases hosted in the cloud as well as on premises." 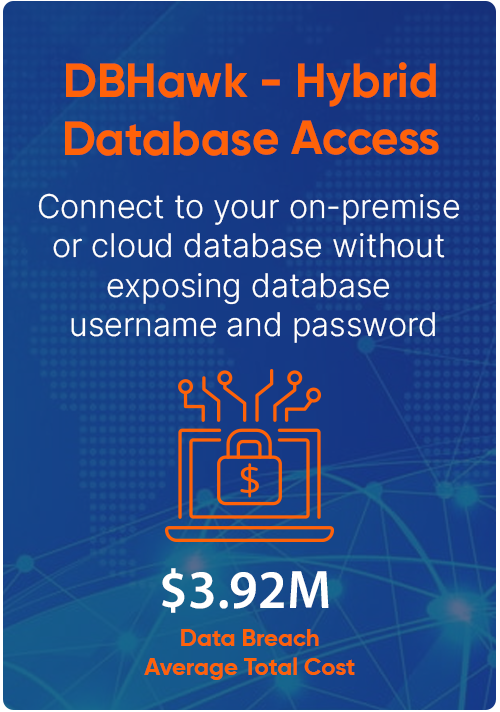