The Best Web-Based Tools for MongoDB

NoSQL databases arose in the mid-2000s in response to the unique data requirements of big data and real-time web applications. In particular, the companies behind these applications realize that NoSQL databases fit their needs for a simple, but highly-scalable and highly-available database architecture. There has been no looking back since then – NoSQL databases are now a permanent fixture in the development landscape. Although it is expected that they will continue to be so in the years ahead, this does not mean that they will supplant traditional relational database management systems (RDBMS) anytime soon. Since the use cases for these database types are different, they each have their own markets.

MongoDB is the most popular NoSQL database in the world today. It is ranked 5th in terms of popularity among all databases – only Oracle, MySQL, MS SQL Server and PostgreSQL, all RDBMS, are more popular. Only two other NoSQL databases belong to the Top 10 on this list, and chances that these two will topple MongoDB from the top in the foreseeable future remain slim. A major reason for MongoDB’s popularity may be its long list of supported programming languages, including C, C#, Delphi, Erlang, Haskell, Java, JavaScript, Lisp, Matlab, Perl, PHP, PowerShell, Python, R, Ruby, and Scala.

When its first version came out in 2009, MongoDB had the mongo shell as the main interface for accessing MongoDB database instances. MongoDB has since then matured beyond its years, and there is now a booming market for GUI tools that can be used for managing and developing MongoDB databases. This isn’t surprising, given MongoDB’s popularity.

Desktop apps are installed and run on your machines while web-based apps can be accessed from your web browser.

On the other hand, web-based MongoDB apps include DBHawk, GenghisApp, and PhpMoAdmin. Since web-based apps are accessible from browsers, there is no need to install an SQL Client program on desktop PCs. This is huge in terms of potential maintenance savings across the enterprise. 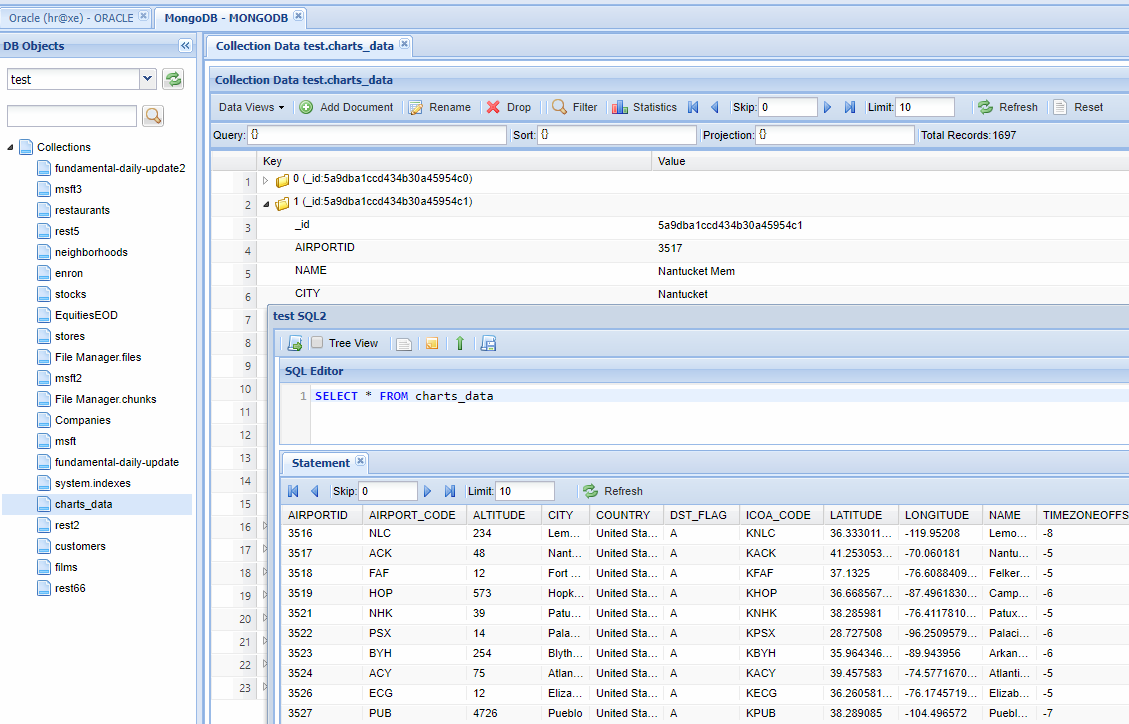 DBHawk, from Datasparc, is an enterprise-ready, yet intuitive, web-based IDE and GUI for MongoDB and other databases, making it ideal for use in a mixed-database environment. For example, if your real-time web application uses MongoDB, and you have a host of other applications using Oracle, MySQL, PostgreSQL and SQL Server databases, among others, DBHawk would be an ideal tool for your development team. DBHawk also supports Amazon RedShift, Heroku, Google Cloud SQL and Microsoft Azure cloud-based databases.

Get started for free.